As Thanksgiving Day is only a week away, I wanted to share all the wonderful blessings that I’m thankful for. Being thankful is much easier than forgiving, but I felt the need to write about both, because many times they come hand in hand.

The definition by http://www.dictionary.com of the word forgive, is to grant pardon for or remission of (an offense, debt, etc.); to absolve or to give up all claim or account of; remit(a debt, obligation, etc.) The definition by the same website, for thanksgiving is the act of giving thanks; grateful acknowledgement of benefits or favors, especially to God. The definition of the root word, to thank, is to express gratitude, appreciation or acknowledgement to.

I’m thankful for many things, but the number one, is Jesus Christ and his love for me. He died a horrible death on a cross, for my sins, not for his, because Jesus was without sin and therefore not needing forgiveness himself, took on all of our sins and died, so that we could be forgiven. He was the ultimate sacrifice for all of our sins.

Forgiveness is more about the condition of our own heart, because we do ourselves a dishonor by not forgiving. If you’ve ever held  a grudge against someone that has done something against you, you know that it hurts your heart and stays with you, much more than it hurts the person you need to forgive. In the Bible (NIV), in Ephesians 4:32, it states, “Be kind and compassionate to one another, forgiving each other, just as in Christ God forgave you.” In Matthew 6:14-15, Jesus said, “For if you forgive men when they sin against you, your heavenly Father will also forgive you. But if you do not forgive men their sins, your Father will not forgive your sins.” The words, in these verses, make it very clear how important it is to forgive. Whenever I have a difficult time forgiving someone, I remember these verses and I recall, Corrie Ten Boom’s personal story of her forgiveness to the former Ravensbruck camp guard, who had been known as one of the cruelest. She said, “she was reluctant to forgive him, so she prayed that she would be able to . She wrote: “For a long moment we grasped each other’s hands, the former guard and the former prisoner. I had never known God’s love so intensly as I did then.”

Even though we are living in very difficult times, let’s remember this Thanksgiving, to give thanks and forgiveness.

This is the thought that I put into action, when I started writing! Everyone needs silence to keep their sanity and even more to be successful.

I don’t know who the author is of this quote, but it’s a very true statement! My Mom used to say, you know who you’re real friends are when you don’t have money, popularity or beauty. Always be yourself and your true friends will be there! 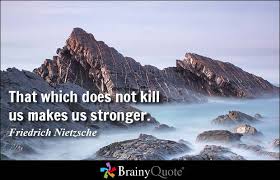 My new blogger friend, Linda from http://educationadvocateblog.wordpress.com, invited me to participate in this three-day quote challenge.

The Rules for the Challenge are:

My nominees for the challenge are:

No obligation-just fun, inspiration and exposure to bloggers you may not have encountered before.

I’ve always loved this quote, because it’s so true!

I was depressed for a long time, before I sought help from a doctor. I know many others, who have done this and it seems that the main reason is that we don’t want to admit there is a problem or we don’t want to take any medication for it. My first really bad experience with depression, was in college and I thought that it was due to my grandfather’s death and this probably triggered it, but I found out years later that it was a combination of chemical and situational depression. During this time, I felt that I couldn’t reach God, I would pray, but I couldn’t feel that God was there. Like there was a wall between us.

The great news is, that the Lord answered my prayers for help! During a chapel service, the preacher said that the Lord spoke to his heart, that there was someone there, who felt depressed and that God wasn’t there when they prayed. I knew the minute I heard this, that he was talking about me! I went to the front to be prayed for and I was the only one who responded to this. After this happened, I felt much better! Years later, I began to feel down and I was very irritable. I didn’t know that being irritable, was a symptom of chemical depression, of course not this symptom alone, but it was part of it and I wasn’t even aware of it at the time. When I thought of depression, I thought the symptoms would be feeling very down, upset and crying all the time, having a loss of interests in the things that were favorite activities and even feeling suicidal. I want to stress to you, how important it is to get help, especially if you feel suicidal. Being irritable all the time, caused me to be mean sometimes to others, especially those I love and it didn’t even cross my mind that it would be a symptom of depression.

God gave us many promises, including helping us with our depression. In Deuteronomy 31:8 (NIV) “The Lord himself goes before you and will be with you; he will never leave you nor forsake you. Do not be afraid; do not be discouraged.” My favorite verses are in Romans 8:38-39 (NIV) “For I am convinced that neither death nor life, neither angels nor demons, neither the present nor the future, nor any powers, neither height nor depth, nor anything else in all creation, will be able to separate us from the love of God that is in Christ Jesus our Lord.” So even if it feels like God isn’t there, He is, so don’t stop praying! God may not answer you in the same way He answered me, but He promises that He will never leave us and will answer our prayers!